“The world too has something of a soul.” Vaclev Havel

And sometimes, when it thinks we are not looking, it shows itself, all soul.

That late July morning I woke in my tent at 5am, sleeping a man’s length from the edge of the pond.  The stars had winked out, a blush suffused the sky.  Something heavy was rippling the water right in front of me.  I made my way slowly to the front of the tent, where the screened door let out onto the pond, a body of water our parents had dug, lined with clay and stocked with fish fifty years ago.

The morning mist skated over the pond.  Right in front of my tent, something large was playing in the water.  Muskrat?–hadn’t seen them in years.  Beaver?  No we were always staving off their certain knowledge that our pond should be deeper…which it should be.  Silt from the highway, which took the upper third of the property had slowly made our pond shallower, perhaps only 8-10 feet at the center. END_OF_DOCUMENT_TOKEN_TO_BE_REPLACED

On February 3rd, in Berkeley, we attended a deeply moving event to benefit the Winnemem Wintu tribe.

We listened to Winnemem Chief, Caleen Sisk-Franco, and to her husband, Mark, describe

the tribe’s bond with the McCloud River Salmon, how the “salmon had given their voice” to the Winnemem Wintu. Last year the tribe journeyed to New Zealand and had a meeting with the Maori people who have happened to become the keepers of this fish, and who have reached out to the Winnemem. The tribe now hopes to bring the salmon back to California, but there are many hurdles in front of them, including the plans of the U.S. government and corporations who have little interest in the Winnemem, or the long term interests of the earth.

This evening of testimony and film was a learning experience, and a solemn reminder that the ground we live upon is soaked with blood, and that all this must change.

In 1854, more than 40 Winnemem Wintu men, women and children were killed by settlers at Kaibai Creek, California. We tasted new bitterness on hearing how more than 150 years later the tribe is “not recognized” by the U.S. government.

Now, the Winnemem Wintu are fighting not only for their own cultural survival, but for the survival of their native lands and for the sustainability of the planet we all inhabit. They are fighting with seriousness, creativity, and with joy.

When the Shasta Dam was built it created a lake that flooded the Winnemem villages. Displaced but not defeated the Winnemem tribe survived and now fights against the raising of this dam and the further destruction of the land and culture.

In 2004 the Winnmem “declared war” on the U.S. government’s planned raising of the dam and held a H’up Chonas (war dance) at Shasta Dam.

sitio tiempo press appreciates these people’s determination and persistance, and takes inspiration from their struggle. You can visit the Winnemem website to find out more. Also see the Sacred Land Film Project and Dancing Salmon Home.

A reading of Burning Silk by Destiny Kinal at Riverrow Bookshop in Owego Sunday January 15th, 2011 morphed into a discussion of the Persephone myth, a natural midwinter theme dealing with the maladies of SADD, depression, and loss of community.

The discussion ranged further into the coming hard times that many are anticipating, not only from the economic downturn, but also from the collapse of our environment as global climate change proceeds: how do we prepare for these changes?

Participants pointed out that hard times are already afflicting those at the bottom of the economy, those who have depended on the underground economy to survive. Two individuals volunteered that they had just lost their jobs because their companies moved to China, a job one of them had held for 16 years.

Persephone, the story goes, the daughter of Mother Earth or Ceres, was abducted and dragged into the underworld by Pluto. The world went into an endless winter as Ceres mourned. The animals sent a delegation to Pluto to negotiate for Persephone’s return. A deal was struck: Persephone could return to the surface of Earth if she ate nothing for an entire year during her stay in the underworld.

At the end of the year, Persephone ate three pomegranate seeds. Thus, a new deal had to be made: Persephone returns to the surface in the spring and summer while in the fall and winter, she remains in the underworld. In this way, not only were the season explained by our ancient forebearers but also death and the consequences of our mortality.

Medicine man of the Lenape Big Horn Band, David Chamberlain, told a myth from his people of horned serpents who live in the underworld, whose ill effects are released when the earth is pierced too deeply. A similar story of an abduction of a human girl by the horned serpents is told by the Lenape as well. Chamberlain, known as Hitakonanulaxk in Lenape, is the author of The Grandfathers Speak: Tales of the Lenape People. The book is available at SRAC on Broad Street in Waverly.

John Doscher of Lockwood, NY, and author of a body of work studying the possibilities of a sustainable society, read three poems on the subject of loss and transformation.

Michael Sean O’Dwyer (Kane) of Waverly and Addison NY read from his recently released book, A Voice in the Wilderness, on his hike from Florida to Canada on the Appalachian Trail, during which time he naturally reflected on the state of the world. O’Dwyer/Kane read passages describing that winter of the soul we call despair as well as thoughts on organizing and strengthening community locally.

The group seemed to agree that the biggest challenge we face now is the disintegration of community, so necessary to organizing to meet hard times prepared. The theme of knowing how to grow your own food and preserve it came up repeatedly.

Destiny Kinal spoke about the metaphor of metamorphosis from a worm to a winged thing, that lies at the heart of Burning Silk, her novel about the alliance between French Huguenot silkmakers and their native American neighbors in southern Pennsylvania in the 1830’s.

Burning Silk, the first novel in the Textile Trilogy, will be followed in 2012-13 by Linen Shroud, which–continuing the story of the Duladier and Montour families in their march toward modernity–takes place during the US Civil War.

Riverrow Bookshop, which is run by John Spencer, one of Owego’s community development entrepreneurs, together with his daughter Laura, features an entire section at the front on regional authors. The basement of the bookstore, organized by subject and genre, is a treasure trove for book collectors.

The organizers of the reading will be meeting to decide whether the Persephone midwinter reading should be an annual event, open to regional writers to read from their work on these themes: the psychological trips to the underworld that afflict us humans at this time of year and the prospect of coming hard times. How can we prepare ourselves for a possible collapse that many scientists and social prognosticators are predicting?

Call Destiny Kinal at 510-701-8909 or 607-565-8475 or contact the Reinhabitory Institute online at info@sitiotiempopress.com if you would like to comment on the event and continue the discussion on the importance of community in weathering hard times. 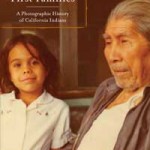 Closing in on the dreaded Thanksgiving holiday, I took a book off my shelf and began to turn the pages. The book is published by Heyday Books is First Families: a Photographic History of California Indians. These are the photos reproduced from family albums. The Ohlone, Miwok, Pomo, Paiute & Modoc, to name only some. Face after beautiful face. Story after story. Captain Jack, the Modoc leader I mentioned in my last post is there. And so is one of the most famous Indians of California: Ishi. The man whose life was put on display as a living museum.

The majority of people in this book are much less well-known, but no less interesting. 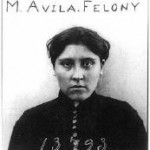 Take for example the story of Modesta Avila. According to First Families, Modesta Avila (Ajachmem) hung a clothesline across the railroad tracks, an act of resistance to the Santa Fe Railroad barreling, stinking and smoking through her land. Santa Fe Railroad say she put a tie across the tracks. No one was hurt by her action, but four months later Modesta was arrested and sentenced to San Quentin Prison. Young and defiant Modesta Avila died at this scenic gaol after serving two of her three years sentence. This post is in her memory!

First Families is written by L. Frank and Kim Hogeland, I reccomend you pick up a copy at your local independent bookstore or order online from Heyday.

It is true and I know it: all of California, not to mention the entire U.S., is really native land. The hills of Marin, the sprawl of Los Angeles, the desert,  and the lakes and the mountains.  Indian land.

And when Thanksgiving rolls around, and families prepare their feasts, gathering around the groaning board to stuff themselves with turkey and stuffing, another truth grabs me by the neck and won’t let go. This Indian land is soaked and stained with native blood. 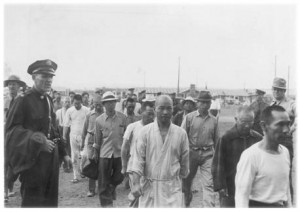 A few years ago I took a trip to the North Eastern corner of California. I went to see the area where Japanese were incarcerated at Tule Lake, now mainly the site of a wildlife preserve. I asked a woman where the Tule Lake Internment Camp had been. She knitted her brow for a moment, and then brightened up and said, “oh, you mean the Jap barracks!” She told me where to go. There is not much left where the camp stood but quite close there was a migrant worker camp. With its gates, and warning signs and barbed wire it seemed like little had changed. Except the people inside spoke Spanish, not Japanese.

There are rocks around this area with messages carved by Issei men, in Japanese Kanji. And on some of the same rocks there are carved much older messages, Indian petroglyphs.

Not too far away is the scene of one of California’s fiercest battles. Kintpuash, otherwise know as Captain Jack led his tribe of Modocs to resist relocation from their lands. They made  use of a natural circular formation of lava rock as a fortress from which he and his people held off hundreds of Federal Troops. Captain Jack subsequently killed General Canby. After this he was captured, hanged and beheaded.

I think I will spend this hollowday reading, perhaps Bury My Heart at Wounded Knee, or maybe I will drive up to Lava Beds National Monument, and pay my respect to Captain Jack.