For two days, 20 speakers are gathering at this scholarly symposium in France to   “recontextualize” the historic and wild counter-cultural event that was Woodstock!

In August 1969, Max Yasgur organized a festival of music and peace on his farm near the small town of Woodstock in upstate New York. His “Woodstock Music and Art Fair” was a great moment in popular music but also – and perhaps more importantly – Woodstock became a symbol of a whole generation of young people who face an America that was reactionary and warlike, adopted a particular way of being and living, culture, freedom of thought and political vision of the United States and the world. 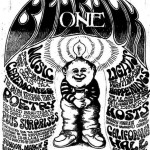 As part of this conference, author Destiny Kinal is presentating a paper on the Diggers END_OF_DOCUMENT_TOKEN_TO_BE_REPLACED

Sexual, blasphemous, atheist, magical, anti-racist and feminist, or just too rooted in scientific reality — which books, From the ridiculously licentious Fanny Hill to the sublimely path-breaking Origin of Species — have raised the ire of a school board or other authority?  The ALA (American Library Association) has lists of books people have tried to get ousted from libraries and schools and they might surprise you. END_OF_DOCUMENT_TOKEN_TO_BE_REPLACED

Mountain Lions in Berkeley? Mike Davis once wrote a book called Ecology of Fear where he took on the bad rap mountain lions have gotten. Through no fault of their own, they must struggle to survive as humans invade their habitat. He described the voracious and amoebic development of Los Angeles with its negative unintended consequences as it sprawled over the former wild and wetlands, wiping out predators and spreading disease.

It was horrifying enough to read about this happening in LA — but — is the same thing occurring in Berkeley of all places? END_OF_DOCUMENT_TOKEN_TO_BE_REPLACED

The Center for Race and Gender Studies at UC Berkeley is holding a talk today from 4-5:30 that addresses this very question, featuring Professor and Director of The Rotary International Center for Studies in Peace and Conflict Resolution, Scott Small. END_OF_DOCUMENT_TOKEN_TO_BE_REPLACED

“Zeitoun is a more powerful indictment of America’s dystopia in the Bush era than any number of well-written polemics,” wrote Timothy Egan of the New York Times, referring to the book by Dave Eggers chosen as this year’s reading for the 6th annual One City, One Book event. END_OF_DOCUMENT_TOKEN_TO_BE_REPLACED