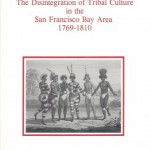 A Time of Little Choice: The Disintegration of Tribal Culture in the San Francisco Bay Area, 1769-1810 by Randall Milliken

Dotted over Northern California are streets, schools, creeks, towns and even shopping centers with names like “Miwok”, “Ohlone”, “Suisun”, “Costanoa”. How many non-native people stop to think about the peoples behind these words? How many have felt, as I have, that the narrative one is taught in California public schools is sorely lacking in substance?  I recently checked A Time of Little Choice out of the Oakland Library. I kept the book until it was overdue and I had re-read many sections. What I found in its pages not only educated me on the subject, and it filled me not only with knowledge, but with rage.

Randall Milliken’s book reminds us that the land that makes up the present day San Francisco Bay Area was once part of a “mosaic of tiny tribal territories” which existed and flourished. Flourished, that is, up to 1769, the time of initial contact with the Spanish.

Milliken has  mined, compiled, compared  and analyzed Spanish Mission and Military records and individuals’ diaries to chart 40 years of “the disintegration of tribal culture”  – from 1769-1810 in what is now the San Francisco Bay Area. There are a couple maps that show the location of over 50  tribes (pp 228, 229). There is also a map showing 8 language groups of native peoples in the Bay Area.

By 1810 these same “tribal territories” were empty of  these tribes. Milliken’s book tells what happened.

When I told some acquaintances about the book, they asked if it was “balanced.” I told them, that I thought the book was a scholarly project to uncover the decimation of tribal culture which was meticulous, but the truth is, there is no “balance” to the history. Whether fully intended or not, the result was near-genocide.

The book quotes passages where the Portola, Fages and other expeditions describe first contact with the indigenous people of the area. The first contacts were experimental. Milliken observed that these people treated the “visitors” and their powerful and new technologies with interest, and sometimes fear, and that gifts were exchanged: beads and food from the Spanish, and baskets and accessories decorated with shells from the  Bay peoples. The Spanish saw that kindness toward the children was noted and appreciated by their native parents, and did their best to foster this. Without editorializing Milliken gives us a glimpse of what the native people were encountering and, while they were trying to learn about these new people and were using the experiences to size up the strangers, nothing had prepared them for what would follow. They had no inkling.

In 1776 the Spanish built the first mission in the area and the Presidio at the strategic site of the opening of the Bay. They brought their animals and fenced off land for crops. They “punished” people who “stole” their possessions by whipping and flogging, and finally by demonstrating their power and shooting them.

Spain, competing with the Russians was compelled to do what it could to insure it controlled the California coast.

There is an interesting part where Milliken describes the superstitious worldview of the Spanish: their belief that the world was a setting for the struggle between God and the Devil in which all non-Christian customs and beliefs were actually the work of the Devil and must be wiped out. On the native side, Milliken speculates based on the Spanish observation that there was a practice of respect and of incorporating the new people and their technology into their own belief system.

The ideological framework of the Spanish missionaries was backed up and enforced by the army. The priests wooed the peoples, and at first children and teenagers went to the Mission to be baptized. Once baptized the priests felt they were responsible to guard the “Christian Indians” and had a  (god given) right to keep people from returning to their “savage” ways. Sometimes they would allow children to continue living with their parents, but the older people who were baptized would be forcibly brought back by soldiers when they left the Missions to go back to their villages.

A Time of Resistance

A Time of Little Choice also unearths the fact that as time went on, in this period there was repeated resistance by the peoples of the area to the Missions, and that this resistance was always met with brutal and overwhelming force. The Spanish implemented a divide and conquer method to set the “Christian Indians” against the “heathens”. The patterns of Indian villages changed as some moved closer to the missions for protection, or convenience, and others were entirely absorbed. Milliken says that this was not “forced” but that is too generous an interpretation, as the lands were overrun, and the native food sources compromised, there was an occupying force of priests who used whips and soldiers who used guns, a much higher technology than the weapons developed by the tribes peoples. There was also the important ideological takeover of the culture by the Spanish, who preached Christianity, damnation, etc.

Milliken documents increased resistance over years as the new generations now knew what the Missions and mission life brought about. There was especially prolonged and fierce resistance from the Saclans. But the different tribes did not unite to resist and thus stood no chance of defeating the Spanish. Milliken notes that the loose and informal structure of these peoples’ societies did not lend itself to unity. And before the Spanish came the different tribal groups did not see themselves as “Indians” but as separate peoples who had some relationship to each other through trade, marriage, etc.

The book also gives a chilling and detailed account of the mass death that escalated over the Mission period.  Epidemic outbreaks of diseases that the Europeans were immune to, outbreaks of syphilis, and the food and water diseases brought by the Europeans and their animals and concentrated in the overcrowded conditions in the Missions. One particularly horrible detail that sticks in the mind is that when Indians were dying of these diseases in the Missions, some of them ran miles away to native villages in outlying areas to try to escape the epidemic, thus spreading it to those villages and killing many more.

A Time of Little Choice is an important contribution that deserves inclusion in any course on California history. Not only an in depth look at the “disintegration of … culture” this book is a detailed and chilling record which vividly exposes the Mission Period as a criminal one, guilty not only of crimes against indigenous people, and but against humanity itself.