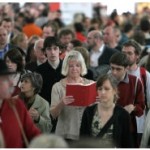 We had been advised, through those in the know, that FBM has grown beyond professional enjoyment.  Many of those who we had been referred to–fellow publishing professionals in Europe–no longer attend FBM because it has grown too large and impersonal.  Buch Messe functions through appointments made months in advance.  Inke and I decided that we would attend Wednesday and Thursday, the most intimate days in the opinion of those in the know, to check it out and figure out how it works.

The scale of the Buch Messe conference center is roughly analogous to the square footage of the terminals of SF airport or Boston Logan (eliminating roads and runways, drawing the buildings into a more compact oval.)

We spent all of Wednesday puzzling out the complex layout–eight buildings, each with three-four floors–as well as the functions and locations of both events and exhibitors.  We attended an excellent seminar on buying and selling foreign rights (30 euros each.)  We trekked the vast hallways, locating specific presses in the French, German and English speaking worlds.

Independent Book Publishers Association (ibpa) were there representing our novel Burning Silk as well as perhaps 75-100 other books in every genre.  The wholesaler Ingram had a large airy booth.  We stopped by Verso, the British radical publisher of Tariq Ali, the New Left Review, as well as scholarly leftist texts.

Do we mention names when the science of name dropping is raised to such a high art atan event like this one?  Our marketing staff back home in Berkeley urge me to fight against my reticence: MFA friend George Michelsen Foy had his nonfiction Zero Decibels (www.georgefoy.com) published by Scribner/Simon & Schuster.  Surely I would be able to report back to him that his book had been prominently displayed among the others on the chair rail lining the large booth?  Seeing his book nowhere in evidence, I combed through the catalog of Spring and Fall releases 2010: not a mention.  I picked up a blue low budget publication titled: Subsidiary Rights Guide. Nada.  Perhaps George’s fine exploration, subtitled The Quest for Absolute Silence, as slim and rich as a Malcolm Gladwell best seller, needed to prove its worthiness to be published in another language by selling more copies in its first English edition? With time, I prayed, and moved on.

In addition to a sales track, which decisive factors in this winnowing process determined which books would be featured for foreign rights?  Surely a book that had just been released this summer would not have a sales record to speak of by October, would it?

Wouldn’t the interests of a given foreign market’s readership come into play?  Mizzi van der Pluijm of Amsterdam’s Contact and a leading player on this stage according to the New York Times had written an article analyzing reader preferences by country.  I was surprised to find that not only do the Dutch not read memoir, they scorn it.  Back in the land of “j’adore” and “je deteste,” Barbara Chase- Riboud of Sally Hemings and Venus Hottentot fame told me that the French adore historical fiction. Chase-Riboud assured me that Burning Silk would find a French publisher.

Time will tell/who has fell/and who’s been left behind (when you go your way and I go mine.)  Bob Dylan.